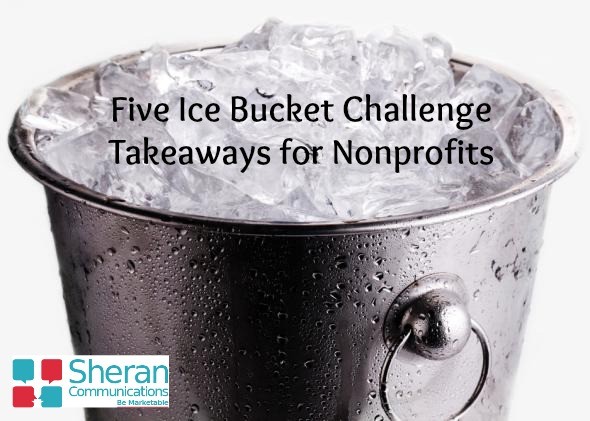 Five Lessons Nonprofits Should Learn from the Ice Bucket Challenge

By now, everyone has heard of the “ice bucket challenge” and perhaps, many of you have taken it on. Nonprofit marketing teams across the country are likely brainstorming what stunt they can perform in the hopes that it goes “viral.”
Before you begin your campaign, here are five things to consider. Who knows anything more about ALS as a result of this challenge?

While at opening day ceremonies for my daughter’s football/cheerleading season, the coaches took on the ice bucket challenge in honor of a coach who had fought the disease. It was a touching gesture for the park and the family. As we looked on, my oldest asked me what ALS is. I could not tell her. We walked away from the stunt, not any more informed and not any more inclined to donate.

While many people are certainly aware that there is a disease termed ALS (also known as Lou Gerhigs Disease), and an amazing amount of funds have been made, most people probably could not tell you what ALS stands for, what the disease is and how the donations are going help. To raise awareness beyond the name of the disease, those making the challenge might have been encouraged to state a definition or fact about ALS when making their challenge or share a website to direct people too.

2. Connect the Challenge to the Cause

To make a stronger impact, make sure the challenge you are asking people to take on makes sense with your brand/message. What does ice water have to do with ALS?

An even stronger challenge would be to get people to do something related to ALS.

Matt Damon muddied the messaging waters even further by dumping dirty water on himself to raise awareness of the countries that don’t have clean water. This stunt would have made perfect sense for an organization that was about clean water.

3. Don’t Distract People from the Goal

Despite its success, the ice bucket challenge was a flawed concept from its onset. They asked people to do the fun (or outrageous) action of dumping a bucket of ice over your head or donate $100. If the donation is the goal, don’t give people a way out.

Participants soon saw the flaw and began to change the challenge by asking people to donate in addition to dumping water on their heads.

Happily, ALS raised an enormous amount of money this year. Can they sustain it? They will have to do careful budgeting without the dollar signs in their eyes, so that whatever programs or initiatives they fund this year will be able to continue when next year’s numbers are significantly lower.

We are a few weeks into this challenge and this creative idea has raised $100 million (The ALS Association, and its chapters, collectively raised $64 million last year, as reported in Forbes). The combination of an embraceable cause, a patient-initiated challenge featuring a silly activity and celebrity involvement, caused the stunt to rush through social channels like a tsunami wave. As the challenge begins to wane, some controversy is stirring up about how much of the money is actually going to programs and research and how much is supporting very large salaries. This leads to a sixth, bonus, point to consider when strategizing a public campaign: Explain where the money goes clearly and upfront.